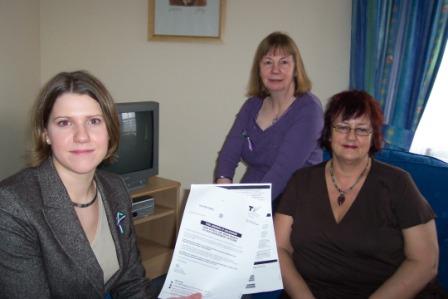 The launch, which took place East Dunbartonshire Women’s Aid refuge in Bishopbriggs, coincides with International Women’s Day. The event also aims to raise the profile of the ‘End Violence Against Women’ campaign.

Commenting on the campaign, Jo said:

“Currently, women’s refuge centres do not qualify for concessions on their TV licences, while hotels, guest houses and residential care homes all pay reduced rates. The aim of this campaign is to reclassify domestic abuse refuge centres, so they are eligible for these concessions.

“For women trying to escape domestic abuse at the hands of a violent partner, finding the money for a full TV licence, and receiving demands for payment, is an unnecessary cause of stress at a time when support is crucial.

“The idea of a ‘refuge’ is to offer shelter and a safe environment. TV can play an important part in this, providing a comfort for victims of abuse in the safety and security of their own room, as well as entertainment for children who may be caught in the middle of abusive relationships.

“If businesses like hotels receive concessions on their licences, it is certainly an anomaly that equal or greater concessions are not made to organisations providing care and support for victims of domestic abuse.”

“With this campaign I am urging the Government to look again at the classification of TV licence fees for refuge centres. Granting licence fee concessions will not only save valuable financial resources for refuges and the women that use them, but also reduce stress for those coping with the trauma of domestic abuse.”

“A hotel like Gleneagles, with hundreds of bedrooms, pays a greatly reduced sum for its TV licences. However, when we opened our new refuge in Bishopbriggs we were advised that we needed to buy 6 full price licences at a cost of £759.

“Our view is that if organisations like luxury hotels get preferential treatment, why shouldn’t hard-pressed charities providing accommodation for homeless women and children? Having access to a television is by no means a luxury for women and children who have had to leave their homes because of domestic abuse.

“The cost of individual licences places a considerable financial burden on our resources and there is no way that women in refuge could or should be expected to pay for the licences personally.

“We are delighted that Jo Swinson, our local MP, who is a great supporter of our work, has decided to campaign against this injustice.”

“Refuge applauds Jo Swinson MP for addressing the issue of television licenses within refuges. Survivors of domestic violence have a great deal to come to terms with as they start their lives free from violence and Refuge supports any initiative which makes their lives more tolerable.”

Jo has written today to Culture, Media and Sport Minister Tessa Jowell, giving details of the campaign and urging action to rectify the anomaly that exists around TV licences for refuge centres.

In addition, Jo has tabled a number of Parliamentary questions around this issue, and an Early Day Motion which Jo will table tomorrow as part of the campaign has already attracted cross-party support.

In a letter to the Prime Minister on 6th March, Jo urged action to bring an end to violence against women. The letter calls for a coordinated, cross-departmental strategy to end violence against women, pointing to the approach taken by the Scottish Executive as an example of how to proceed.

It also calls for the Government to sign up to the European Convention on Trafficking in Human Beings with immediate effect, and asks what the Government, and Mr Blair personally, are doing to highlight International Women’s Day on 8th March.