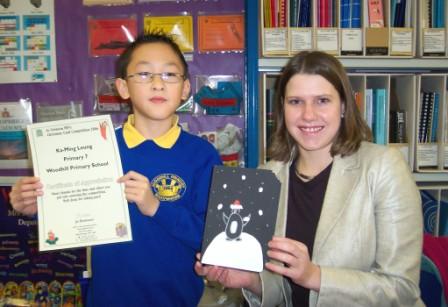 Primary 7 pupil Ka-Ming Leung received a certificate and £20 book token from Jo for his winning entry. There were over 800 entries for the competition to produce a design to be made into Jo Swinson’s official Christmas Card for 2006. The competition also challenged school pupils to write a Christmas poem, to be printed on the inside of the card. The winning poem was written by Roisin Downie, a Primary 6 pupil at St Andrew’s Primary in Bearsden.

“My warmest congratulations go to Ka-Ming for his card design and to Roisin for her Christmas poem. The printed card, including the cover design and poem, looks fantastic.

“I would also like to thank all the schools who took part in the competition and the pupils who put lots of care and hard work into their cards and poems – choosing a winner was not easy!”

The Christmas card designs were judged by Willie Rodger, a local artist from Kirkintilloch, and James Higgins, curator of the Auld Kirk Musuem. The poems were judged by former Provost Robin McSkimming and members of the Bearsden Literary Society. Each of the pupils who took part will receive a certificate of appreciation