Jo Swinson MP for East Dunbartonshire attended an event at the House of Commons to promote the creation of Community Covenants across the United Kingdom.

Organised by The Royal British Legion, the event highlighted the importance of local communities getting behind the Armed Forces community in their own area and honouring the principles of the Armed Forces Covenant in practice on the ground.

Launched in 2011 the Community Covenant scheme is helping to transform the relationship between local communities and serving and reservist Armed Forces personnel, veterans and their families, for the benefit of both communities.

The Legion is encouraging local authorities to sign a Community Covenant as their own unique commitment to develop mutual understanding, meet the needs of the Armed Forces community and identify opportunities for closer working in their area. More than 50 Community Covenants have been signed so far, and another 50 are in the pipeline.

"I was delighted to show my support for The Royal British Legion and to back its call for local communities to strengthen ties with the Armed Forces community in their own area.

"I am pleased that East Dunbartonshire has joined so many other local authorities by signing up. Now all of us need to ensure the commitments made really make a difference where it matters – on the ground."

"Community Covenants provide an excellent opportunity to honour the Armed Forces Covenant and really bring its principles to life at a local level.

"We're delighted that a growing number of local authorities from across the political spectrum are engaging with their local Armed Forces communities, and charities such as the Legion, to show their support for our brave Service men and women and their families. We ask every local authority to 'sign up'.

"We are very grateful to Jo Swinson MP for attending the Legion's event and backing stronger local support for their Armed Forces community." 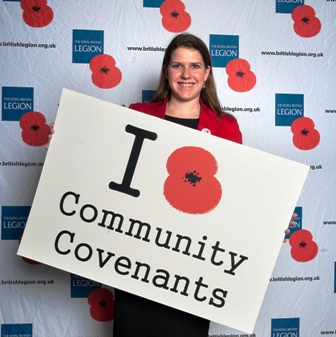 Jo at a recent House of Commons reception for the Legion to highlight the importance of honouring the Armed Forces Covenant locally.

The Royal British Legion stands shoulder to shoulder with all who Serve. It is the nation's leading Armed Forces charity providing care and support to all members of the British Armed Forces past and present and their families. It is also the national Custodian of Remembrance and safeguards the Military Covenant between the nation and its Armed Forces. It is best known for the annual Poppy Appeal and its emblem the red poppy — www.britishlegion.org.uk.

Examples of projects that have already received funding from the Community Covenant Grant Scheme include:

Full details on the Community Covenant Scheme can be found here: www.mod.uk/covenant