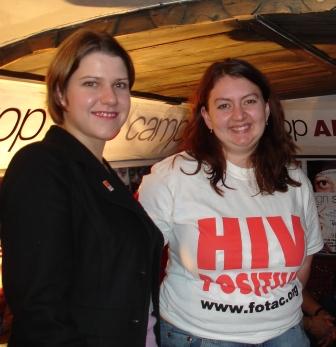 Jo Swinson MP has joined with Kirsty McNeill, who hails from Milngavie and is Manager of the Stop AIDS Campaign, in support of World AIDS Day.

Jo, also from Milngavie, met Kirsty and fellow campaigners at an event in Parliament to mark World AIDS Day yesterday.

“It was great to meet someone from Milngavie running a high profile, highly worthwhile AIDS awareness campaign. Kirsty is setting a good example to young people in East Dunbartonshire who feel passionately about a cause and want to make a difference.

“The G8 has promised to get HIV treatment to all the men, women and children who need it by 2010. This is a great achievement for AIDS campaigners and a really important first step. Both Campaigners and MPs now need to keep up the hard work and pressure to ensure that these promises are kept.”

“I was grateful to Jo for coming along to show her support for the Stop AIDS Campaign. We need as many MPs as possible to follow Jo’s example and put pressure on the Government to take action.

“With this kind of support from politicians all over the country we could achieve a rapid scale up of treatment and ensure that 2005 goes down in history as the year the world finally got to grips with the gravity of the AIDS emergency.

“Campaigners in Milngavie have done brilliant work raising the profile of HIV and wider poverty issues. They should be really proud of the role they played in persuading the Prime Minister to push for AIDS treatment for all in this year’s G8. I hope they’ll all keep in touch with Jo to find out about the fight to make AIDS history.”

The AIDS pandemic has claimed over 3 million lives this year, including those of half a million children. Over 40 million people in some of the world poorest countries are living with this killer disease – most of them without treatment.

Deaths on this scale are equivalent to a jumbo jet crash every hour of every day of the year. In the UK, public health services can quickly provide effective anti-AIDS drugs, but for the vast majority of people in poorer countries these drugs are too expensive.

Jo recently raised the cost of anti-AIDS drugs as an issue during a Westminster debate on trade with Developing countries. As a result, the Government minister for International Development agreed to meet local fair trade supporters, and Jo hopes to use this opportunity to press for attention to be given to the cost of anti-AIDS treatment.

This World AIDS Day, Stop AIDS campaigners are calling on governments to keep their promises on AIDS treatment for all by