Jo attended the event alongside 50 other MPs, and spoke to adults and children about living with type 1 diabetes.

Type 1 diabetes is a serious autoimmune condition that causes the body’s own immune system to turn on itself and attack cells in the pancreas, which produce insulin. The condition affects about 300,000 adults in the UK, including over 26,000 children and requires multiple daily insulin injections and finger prick blood tests to manage.

Commenting on the event Jo said:

“My sister has Type 1 diabetes so I know how important it is to raise awareness. I applaud JDRF and the ambassadors who were in Parliament last week educating MPs on the enormous cost to society of type 1one diabetes.

“It’s vital that we ensure adequate research is being done so that one day we can find a cure.”

Over the last few years, JDRF has successfully built awareness for type 1 diabetes and has developed a political presence within Westminster through the devolved administrations, campaigning on the postcode lottery on the provision of insulin pumps, continuous glucose monitors and advocating the importance of funding medical research for type 1.

In 2009 the UK Government, through the funding bodies including the Medical Research Council and National Institute of Health Research committed

£51 million to research, to tackle the growing problem of diabetes. Of this, only £6 million[1] was applicable to type 1 diabetes. In relation to funding, the UK falls way behind other developed countries and JDRF believes that this needs to change. Not only will greater investment in research ensure we find the cure for type 1 diabetes sooner; it could also bring significant advantages to the UK economy. 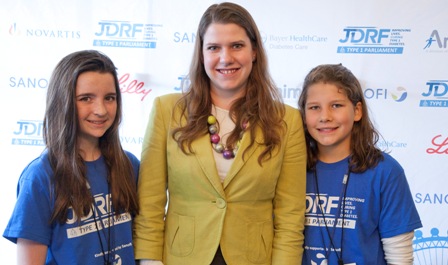 JDRF exists to find the cure for type 1 diabetes and its complications, and is the world’s leading type

1 diabetes research charity. At a global level, JDRF volunteers and staff have been responsible for raising over £900 million to support type 1 diabetes research, since the charity’s inception. www.jdrf.org.uk

[1] Figure is referenced from a letter received from Baroness Thornton on 12 April 2010, then Parliamentary Under Secretary of State at the Department for Health