Jo Swinson MP for East Dunbartonshire was presented with a book of artwork created by pupils at Bearsden Academy in support of International Red Hand Day which took place on 12 February 2013.

The students were also wearing t-shirts bearing the red hand, a symbol of protest against the recruitment and use of child soldiers – a deplorable practice that still happens around the world.

Since 2002, Red Hand Day has drawn attention to the plight of child soldiers. During wars, these children are sent into violent battles where they must run dangerous errands, are reduced to being slaves for their commanders, and are often victims of sexual violence.

“The moving artwork and messages the students created in support of Red Hand Day recognise the 300,000 children who have been killed, maimed, raped, drugged, abused, and forced to commit violence while under the direction of adults.

“Children continue to be recruited as soldiers and exploited by adults, despite the prohibitions of international law.

“I applaud Bearsden Academy for support of efforts to stop the use of child soldiers worldwide. For more information on the global campaign visit http://www.redhandday.org” 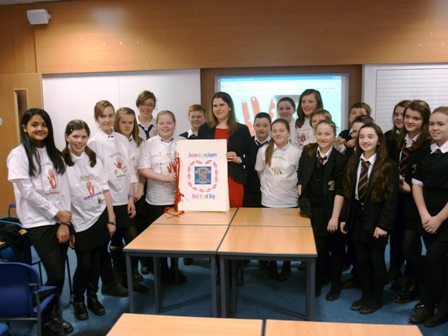