Earlier this week Jo went with concerned constituent Euan McGeachie for a walk on Allander Way in the heart of Milngavie between Auchenhowie and Dobbies. Following an email she received from the young constituent they examined the amount of rubbish left on the ground and in the river.

On an earlier walk with his father Euan counted 890 bottles and cans, most of them beer, 40 paper bags, 65 pieces of paper and cardboard, as well as a large amount of trolleys abandoned by the river.

For tourists walking from Glasgow to the start of the West Highland Way, this stretch of the Kelvin Walkway is their first glimpse of Milngavie. Jo has called on the Council to act and remove the rubbish so the area can be enjoyed by walkers, cyclists, and runners alike.

Jo has asked the Council to ensure that bins are placed along the path and the Police to include this area on their patrols given the high number of discarded beer cans. While there is no excuse for people who don’t put their litter into bins and protect the local environment, the Council needs to do its bit as well.

“9-year old Euan’s email is one of many I receive from constituents upset about the amount of litter and fly-tipping in East Dunbartonshire. We live in a very beautiful area, but the look of our green spaces is being spoilt. While it’s important for people to get rid of their rubbish in the proper way it’s also the job of the Council to make sure the local area stays clean. I hope the Council will take action to make Allander Way a place local people can enjoy.” 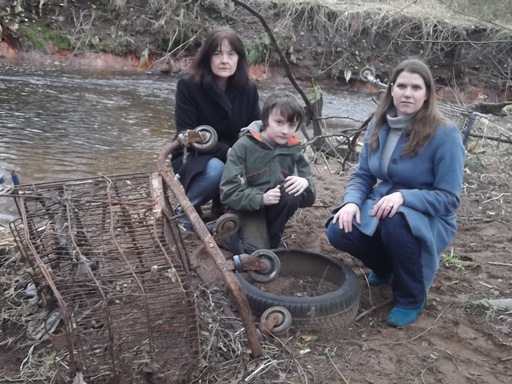