Congratulations are due to Lenzie's Scott Houston for winning Best Documentary at the first ever Film The House Awards.

Local MP Jo Swinson attended the ceremony Tuesday night in London to accept the award on behalf of Scott who unfortunately could not be there.

Scott's documentary Fought By Weapons, Won By Men was one of 18 films shortlisted from more than 1,000 hours of film entered into the competition before going on to be chosen as a winner. Scott had his film screened last night on the House of Commons Terrace and his prizes include a studio tour, work experience, and a private screening for friends and family.

"What a truly amazing result. I am so proud of Scott.

"With Remembrance Sunday coming up Fought by Weapons, Won by Men is a timely reminder of how PoppyScotland supports those who made the ultimate sacrifice for us all. Residents can watch his film athttp://vimeo.com/43133213."

"I am absolutely thrilled and honoured to have won 'Best Documentary' at the Film the House awards. The timing could not be more appropriate with this years' Poppy Appeal getting in full swing and Remembrance Sunday just around the corner. The award is testament to crucial role that Poppyscotland play in supporting our veterans and their families and all the great work they do. Here's hoping that this award is the first of many!"

Film the House is a national competition for budding UK film makers, directors and script writers that aims to raise political awareness of the importance of intellectual property to the film industry. The competition invited members of the public to enter their films and scripts, the best of which were nominated by local MPs. 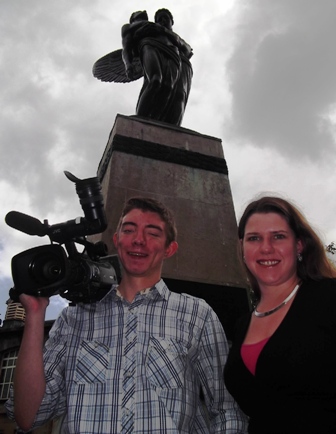 The seven award judges were:

- Nik Powell, Producer and Director of the National Film and Television School, who is famous for setting up Virgin Records with Richard Branson in the early 1970's. He also co-founded Palace Video, Palace Pictures, Palace Productions and then later Scala which has produced films such as Backbeat, Last Orders, Ladies in Lavendar and Calendar Girls. Amongst many other achievements, he is also Chairman of the BAFTA Film committee and a member of the BAFTA Board of Trustees.

- Jamie Graham, Deputy Editor of Total Film Magazine, who regularly writes reviews on the latest releases, and interviews some of the top names from within the film industry.

- Emma Loach is an observational documentary film-maker and is Head of Documentaries at CTVC. Her recent work includes Ian Brady: Endgames of a Psychopath, which aired on Channel 4 this summer. She also directed and produced Fix My Family for BBC2.

- Sabine Henssler is Director of Communications for Europe, Middles East & Africa for the Motion Picture Association. One of her priorities is safeguarding and nurturing creative talent within the industry.

- Stephen Navin is the Chief Executive of the Music Publishers Association, with a career spanning more than 30 years in the entertainment business. Stephen has also worked as Music Adviser to the UK Department of Culture, Media and Sport and was VP Operations for BMG Europe and then CEO of the V2 Music Group. In addition to his work in the music business, he has worked in film and television production and distribution for the Virgin Group and established a publishing company that specialises in limited edition books.