Jo met with Mark Kiehlmann, founder of the East Dunbartonshire Cycle Co-op; Paul Meehan, Head Teacher at Wester Cleddens Primary School and pupils Calum Aitken and Kieran Ballard who were in Parliament to celebrate the Sustrans’ Free Range Kids Campaign, which aims to get children walking and cycling to school and beyond.

The enormous rise in the speed and volume of traffic has driven children indoors or into cars to be chauffeured around. Sustrans wants more children to have the confidence to travel independently, play outdoors and explore their local community for the sake of their health, happiness and well-being.

“Free Range Kids is a great initiative that ties in nicely with the local enthusiasm for cycling that residents such as Calum and Kieran have shown. These two young boys have demonstrated to their peers, teachers, and politicians like myself, just how we can achieve a healthier and cleaner future. I was delighted to meet with the boys and hear first hand just how much they enjoyed the physical activity first thing in the morning and at the end of the day. It is clear that safety on the roads is an issue for many residents and I support the local campaign for 20mph speed limits on residential streets where people live.”

“The school has been working with ED’s Cycle Co-op to promote cycling and we were delighted that these young boys should be given such ‘a once in a lifetime’ opportunity to tour the Houses of Parliament, meet the MPs and pose their questions directly to them.”

“Sustrans has been successful across the UK in achieving greater active travel where they work on the ground. In Scotland they have very successful programmes in Edinburgh and Perth. It would be fantastic if East Dunbartonshire Council was able to partner with an agency such as this, so that our community can benefit from their knowledge and experience.” 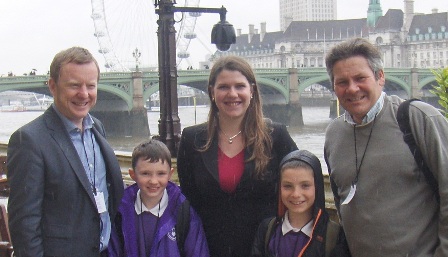