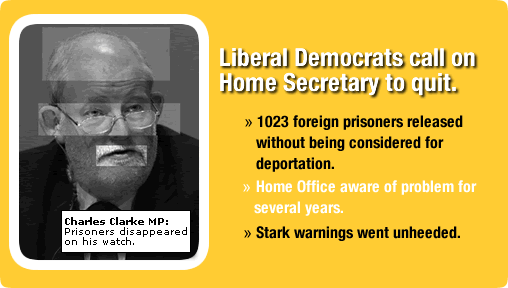 Jo Swinson MP has called on Home Secretary Charles Clarke to resign following his admission that the Home Office released 1,023 foreign prisoners who were meant to be considered for deportation.

Both the Liberal Democrats and the Conservatives have called for Mr Clarke to quit over the scandal.

“Over a thousand prisoners released, including rapists, murderers and paedophiles; clear warnings unheeded by the Home Office; systematic failure to follow basic rules on recording released prisoners’ addresses. The Home Secretary must say enough is enough and resign.

“Mr Clarke has stated he should stay and sort out this mess. He has been in a position to do that since first learning about the prisoner releases quite some time ago, but has failed to do so. Why should he be given a further opportunity to preside over such a fiasco?

“This whole affair has been highly damaging to the Prime Minister, who can no longer preach with any sense of credibility about the importance of tackling law and order.”

Jo has tabled a series of questions to the Home Office in order to clarify how many of the total number of foreign prisoners walking free were released from prisons in Scotland.