Jo and Nick Clegg set out a better deal for dads

To mark the introduction of shared parental leave, which begins on April 5, Nick announced plans to give dads an extra four weeks off work with their newborns during a visit to Playtown in Bishopbriggs. 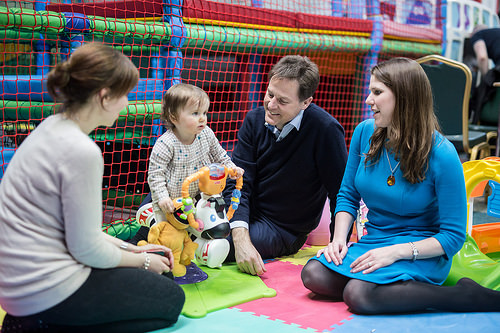 Helena and her daughter with Nick and Jo

Currently fathers are entitled to two weeks but Liberal Democrats want to go further and are making a manifesto commitment to offer an extra four weeks exclusively to fathers.

This would take protected paternity leave for dads up to six weeks.

“To build a fairer society, the Liberal Democrats want to tear down the barriers that stop people reaching their full potential.

“For too long, mums have been told their place is at home with their child, while dads return to work.

“I want parents to choose for themselves how to balance work and family.”

“Shared parental leave is my proudest achievement as a Minister and I’m delighted that it finally becomes a reality this week. It will help drive a cultural change that champions the role of dads, but we can go further to challenge the gender stereotypes that all too often write fathers off as hapless or bumbling.

“So today I’m calling for a dad revolution.

"Liberal Democrats want to triple paternity leave, to encourage new dads to spend more time with their child in those vital early weeks and months after birth.

"Most fathers want to spend more time with their new baby – and we know it makes a positive difference for children when they do.”