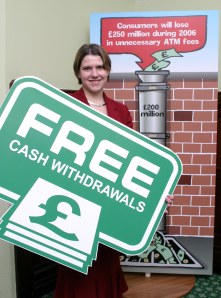 Jo Swinson MP has written to Treasury Minister Ivan Lewis to call for action to stop the spread of fee-charging cash-machines.

The letter coincides with a summit of ATM stakeholders hosted by the Treasury that is being held today.

Commenting on the issue, Jo said:

“Today’s summit offers the opportunity for much discussion of the issues surrounding ATMs, but to be worthwhile it must result in action and concrete guarantees that the spread of fee-charging cash machines will not continue.

“I have written to the Minister urging him to meet the aims of the Nationwide Building Society’s Free Access to Money campaign, which include banks and building societies stopping all future sell-offs of their ATM network, as well as standardised signs to show clearly whether cash machines will charge a fee.

“In five years, we have gone from a situation where nearly all cash machines were free, to one in which almost half charge a fee. According to the Nationwide campaign, the amount paid in ATM charges this year will be £250 million.

“The scandal of these charges is that they hit hardest those on low incomes, who can often only afford to take out smaller amounts at a time and so end up making more withdrawals.”

Ahead of today’s Treasury summit, Nationwide is urging the Government and industry to agree and commit to deliver the following key action points:

• Banks and building societies should commit to no longer sell off any part of their ATM networks to charging operators.

• An agreement from all ATM operators to use clear, standardised signage so that consumers can see at a glance whether or not a machine will charge

• Guidance should be provided to owners of all major public sites and areas which the public rely on, that charging machines should be installed only as a last resort (for example, Post Offices, hospitals, main rail and Underground stations).