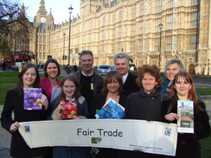 The question was put earlier this week to House of Commons Commission spokesman Nick Harvey MP.

“I saw huge enthusiasm surround Fairtrade Fortnight in East Dunbartonshire, as, I am sure, did my colleagues in their own constituencies around the country. To make a real difference, Fairtrade is a habit that needs to be sustained all year round.

“Although 95% of souvenirs sold in Parliament are from British suppliers, Parliament has an opportunity to set an example by asking these suppliers to source raw materials that are fairly traded. I have asked the House of Commons Commission to look into this matter and report back to me.”