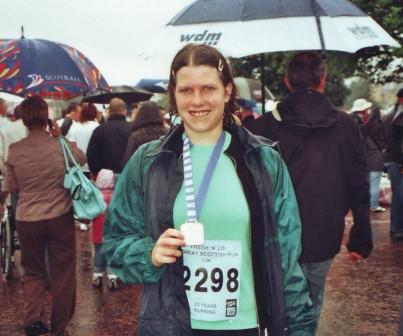 Jo was running the 10K in preparation for October’s Great North Run, a half-marathon

Jo was among the 20,000 other athletes under starters orders for Sunday’s Great Scottish Run, as a packed two days of events saw Glasgow enjoying its busiest weekend for years.

It was a bumper weekend for events in the city, with 110,000 Robbie Williams fans descending on the city to see the pop star perform two sold out gigs at Hampden Park, and 50,000 members of the Tartan Army cheering on the Scottish football team at Celtic Park.

There were also expected to be around 4,500 delegates, among them some of Europe’s leading brain specialists, attending a conference of the prestigious European Federation of Neurological Societies (EFNS).

“After doing Race for Life earlier this year, I got the running bug. I’m currently training for the Great North Run half-marathon in October, which I am running for Diabetes UK. Though 13 miles will be tougher than today’s 10K, I was happy with my performance and finishing the race in under an hour gave me some confidence for next month’s challenge.

“There was a terrific spirit on the day amongst the runners, which really helped the race go more quickly when legs were tiring towards the end!

“The programme of events that has taken place across Glasgow this weekend is hugely impressive. With an estimated £20m generated for the city’s economy, the event organisers and everyone who had a hand in making the weekend such a success deserve great credit.”