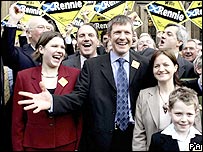 Jo Swinson MP has expressed her delight at the outcome of yesterday’s sensational by-election in Dunfermline and West Fife, and warned Labour that it can no longer take its Scottish heartlands for granted.

Commenting on the result, Jo said:

“I am delighted to be able to celebrate this historic result for the Liberal Democrats in Scotland. At the end of a hard-fought campaign, the voters of Dunfermline and West Fife chose to send a stark warning to Downing Street not to take traditionally Labour areas for granted.

“The Liberal Democrats are firmly placed as the real alternative to Labour in Scotland, as we are in much of Great Britain. People want a change, and they are increasingly choosing the Liberal Democrat agenda of creating a fairer, greener, more democratic society.”

“This result is not only an embarrassment to Chancellor Gordon Brown, who can now enjoy being served by a Liberal Democrat MP, it is a serious blow to his authority after an election campaign in which he featured prominently.

“The Conservatives lost even more support than their average for Parliamentary by-elections since 1997, and the ‘David Cameron’ factor received short-shrift from voters.

“Another dismal SNP showing suggests the party are running out of ideas and going nowhere fast.”

This Lib Dem gain was the first ever gain from Labour in a Scottish parliamentary by-election. If a 16% swing was repeated across Great Britain more than 200 Labour seats would fall to the Lib Dems. The Scottish Liberal Democrats have increased their vote in each of the last three General Elections and won 11 of the 59 seats in 2005.

Results in the Dunfermline and West Fife Parliamentary by-election: