Jo looks at life in Dungavel 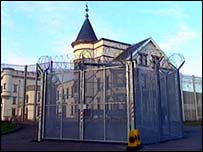 Jo was accompanied on her first visit to the centre by John Barrett, MP for Edinburgh West. After holding talks with centre managers, the pair were shown round the facilities, including those used for the heavily criticised practice of detaining children.

“Obviously Dungavel has been at the centre of controversy many times over the past few years, so I was glad to be able to see the facilities for myself and put my own questions to managers at the Centre.

“Regarding the detention of children at Dungavel, holding children for extended periods of time is a completely inappropriate and unacceptable policy. There is currently a ‘tough luck’ approach towards those children whose parents’ actions have resulted in them being taken into detention.

“The Liberal Democrats have proposed that anyone under 18 should not be held in detention for more than 7, or in exceptional circumstances, 10 days.

“On a positive note, no families are currently detained at the centre, and the average time of detention for families is two days at present.

“The risk of failed asylum applicants absconding, as arises in a small number of cases, does mean that facilities for detention are, unfortunately, necessary. However, removal of people or families who are settled, have put down roots and are not a ‘flight risk’ is nonsensical and reflects the Home Office’s heavy-handed approach to removal of asylum seekers.

“Much of the controversy surrounding treatment of asylum seekers in Scotland arises from the fact that an overlap of devolved and reserved policy matters is involved. There must be a clearer understanding of how immigration and asylum policy works in conjunction with devolved services responsible for looking after the health and educational needs of children caught up in asylum cases.”