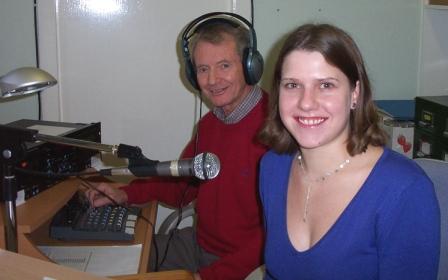 Jo Swinson took part in CSV Make a Difference Day on Saturday (28th October), by making a reading from the Kirkintilloch Herald for Strathkelvin Talking Newspaper.

Strathkelvin Talking Newspaper, which meets on a weekly basis in Kirkintilloch Volunteer Centre, records audio versions of the local paper for the visually impaired in the Kirkintilloch and Bishopbriggs areas. The reading was been organised through the Volunteer Centre East Dunbartonshire.

“Strathkelvin Talking Newspaper does vital work for the visually impaired in East Dunbartonshire. Many residents in this area rely on the local paper to keep in touch with local events, and the service provided by the talking newspaper gives people access to the news in an alternative to print format.

“Make a Difference Day serves not only to get more people involved in Volunteering, but also to highlight and commend the unsung work of those make a difference week in, week out. I am happy to be making my contribution on Make a Difference Day 2006 for the second year running, and I hope that it will prompt people to think about giving up their own time to volunteering.

CSV Make a Difference Day took place on Saturday 28 October 2006, with activities taking part a week either side. An estimated 110,000 people took part, to give time rather than money to improve their local community. The campaign was organised by CSV (Community Service Volunteers) and supported by Barclays community investment programme and the Home Office Active Communities Directorate.