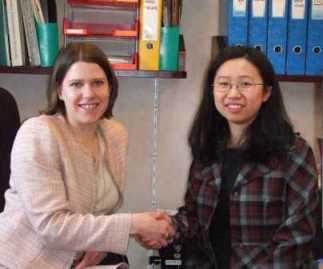 Jo Swinson MP has today teamed up with Wing Yee Li, the young Parliamentary Ambassador who will be shadowing her periodically over the next six months as she carries out her Parliamentary duties.

The MPs Shadowing Scheme was launched today by Operation Black Vote (OBV) and The Electoral Commission, and is designed to encourage Black and minority ethnic (BME) participation in the democratic process.

“It is a serious problem that large numbers of young people in this country, particularly from ethnic minority backgrounds, are not engaging in politics. This scheme, which has proven very successful on the two previous occasions on which it has been run, will go some way towards addressing this problem.

“I hope Wing Yee will gain greater enthusiasm and insight into politics as a result of her time in Parliament, and will share her experiences with her fellow students at Edinburgh University.”

The Parliamentary Ambassadors are selected from communities across the country and the scheme promotes democratic participation, aiming to make politics accessible to all.

The Ambassadors will organise voter registration and political empowerment drives within local community groups. They will seek to demystify the role of politicians and encourage BME groups to both vote and play an active part in politics. Currently, people from Black and minority ethnic backgrounds are less likely to vote than white people (47% compared to 60%).

“This is the third year we have run this scheme, and to date most have gone on to play important roles in their communities and civic life. Three scheme graduates now work within party offices and five others stood in last the general election. I’m convinced that this year’s intake will be leaders of tomorrow.”

“We’re very excited to be involved in the MP Shadowing Scheme. We all engage better with politicians if they’re seen to be part of our everyday lives, and it’s vitally important that politicians reflect the people they represent. The Commission’s own research in this area has made us acutely aware of perceptions in Black and minority ethnic communities that “we wish political parties had more people like us”. The value of this shadowing scheme is not only that these participants get a unique opportunity to work with the MPs, but that they then share their experiences with their peer groups.”