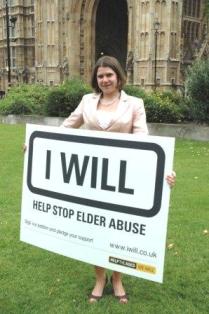 Jo Swinson MP has joined Help the Aged in a national campaign to raise awareness of the abuse of older people, as the Charity supports the first ever World Elder Abuse Awareness Day on June 15.

500,000 older people are believed to suffer abuse at any one time in the UK. With evidence suggesting that abuse is often committed at home and by a relative, Help the Aged is urging members of the public to make sure they understand elder abuse and know what to do if they think someone is being abused.

“I am pleased to be able to support Help the Aged’s campaign and to mark the first ever World Elder Abuse Awareness day.

“Not enough is known about the different forms elder abuse can take, and it can often go on undetected. Help the Aged’s campaign is a vital in ensuring that elder abuse is recognised and brought to a stop in East Dunbartonshire and across the whole country.”

“Half a million older people are believed to be abused at any one time in the UK. This is a shocking statistic. Abuse can take many forms and is often difficult to detect. For some older people it may mean having their savings slowly siphoned off and stolen. For others, the abuse may be psychological and involve being repeatedly shouted and sworn at.

“Everyone has a role to play in keeping older people safe from abuse and to make sure that it doesn’t go on undetected. We can all help by keeping a watchful eye out for neighbours, friends and relatives.”

Help the Aged is encouraging the public to visit www.iwill.co.uk to sign up to the ‘I Will’ pledge to help stop to elder abuse, or to download a blank petition. Alternatively, members of the public can pop into any Help the Aged high street shop to sign the petition.