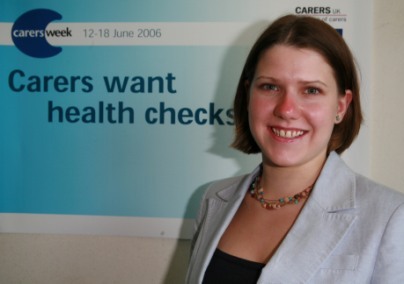 In a major survey, 79% of carers said their health has been affected by caring

Jo Swinson MP has applauded the launch of a new campaign ‘Carers want health checks!’ which has been unveiled as part of this year’s Carers Week (12-18 June).

As well as signing an Early Day Motion supporting the aims of Carers Week, Jo has written to Greater Glasgow Health Board asking them to advocate that GP practices introduce regular health checks for carers. In East Dunbartonshire over 12,000 people provide unpaid help and support to a relative or friend who is either frail, sick or disabled.

“I am pleased to show my support for Carers Week, and pay tribute to the hard work and sacrifice of East Dunbartonshire’s carers.

“Many carers say their health has been affected by caring and it is important that we recognise their health needs as well as those they care for. Offering regular health checks is one way we can do this.

“Carers Link, based in Milngavie, offers a valuable service to carers through individual and group support. I urge carers not to neglect their own health and to use the local support services available to them, including Carers Link, who can be contacted by calling 0141 955 2131.”

A major national survey of over 5,600 carers has revealed that more than three quarters (79%) of carers say that their health has been affected by caring, with stress and depression being amongst the most common complaints. Almost as many (71%) say that health problems affect their ability to care. Only one in four carers (27%) has been offered a health check by their GP, but the survey revealed that nine out of 10 believe that all carers should be offered a health check.

Acting on the results of this study – the largest ever in the UK – the eight national charities that make up the Carers Week partnership are calling on the NHS to introduce regular health checks within 12 months of someone becoming a carer, and regularly thereafter.