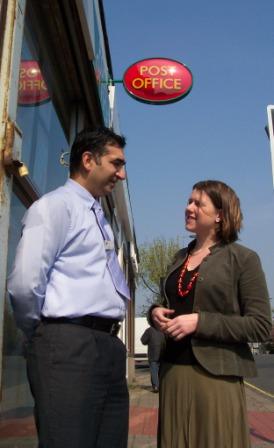 Jo Swinson, MP for East Dunbartonshire, has welcomed the launch of the National Federation of Sub-Postmasters’ campaign to persuade the government to reverse its decision over the axing of Post Office Card Accounts (POCA).

It is feared that the decision not to renew the POCA contract, which expires in 2010, could force the closure of thousands of urban and rural Post Offices.

“This campaign has my full support. The timing of the launch could not be more appropriate, as I am currently conducting a consultation with all sub-postmasters in East Dunbartonshire, many of whom have already raised their concerns with me over the ending of card accounts.

“Post Office Card Accounts are used by 4.5 million people across the country, far more than was originally expected when they were launched. Now the Department for Work and Pensions is forcing people to change how they receive pensions and benefits. People who are happy with the card accounts, of whom there are evidently a great many, should be free to continue using the service if they wish to do so.

“Post Offices fulfil a vital role in so many communities, however the Government is set on a course that will see them wither into extinction. The DVLA has been encouraging people to renew tax discs online rather than at the Post Office, the TV licensing authorities will no longer use Post Offices for TV licences, and now the Department of Work and Pensions is withdrawing the Post Office Card Account. This amounts to a cross-departmental assault on Post Office services.

“The Federation of Sub-Postmasters know better than anyone else the challenges faced and the precarious position of many Post Offices. The Government must listen to them.”

The NSFP say that the decision to allow pensions and benefits to be paid direct to bank accounts in recent years has slashed the £400m the network received from operating the system. And the number of people picking up payments at post offices has fallen from 13 million to about 4 million