A Royal Mail post box painted gold last summer to mark Team GB and Paralympics GB's success at the London 2012 Games has been given a plaque to commemorate their wonderful achievement. 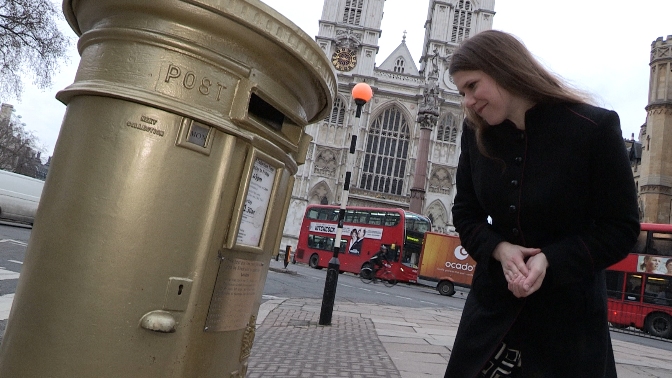 The plaque was officially unveiled by Jo Swinson MP for East Dunbartonshire and Minister for Postal Affairs.

The post box near Westminster Abbey was painted gold before last summer's Olympics to demonstrate the transformation from red to gold boxes. The idea proved so popular that Royal Mail announced in the autumn that all its gold boxes would stay that way permanently.

The unveiling marks the start of Royal Mail's campaign to install permanent gold post boxes, all featuring plaques and many of which will be brand new.

"Making the gold post boxes permanent is a great way to mark the fantastic events of London 2012 and a part of the legacy of the Games. The other post boxes up and down the country are a fantastic reminder and a fitting tribute to our athletes who did Great Britain proud last summer."

"This post box has become a cherished local landmark and it's fantastic it's now permanently gold. We hope local residents for years to come will enjoy using this unique and very special post box, which will become a great reminder of London 2012."

The post box was one of 110 across the country painted gold by Royal Mail last year to mark the successes of Team GB and Paralympics GB at London 2012. All the post boxes will remain permanently gold and feature a plaque which names the athlete and marks their gold medal achievement, or marks the location's connection with London 2012.

The post boxes have now become cherished local landmarks, with many members of the public visiting them and circulating pictures of them on social media channels.

The location of the boxes can be seen at www.goldpostboxes.com along with many pictures uploaded by visitors.

Painting the iconic post boxes gold was a part of Royal Mail's plans to honour the victories of Team GB and Paralympics GB, along with the gold medal stamps programme. Royal Mail was the first postal administration to produce stamps for every gold medallist in both Games.

The decision to keep the post boxes gold marks the first time in Royal Mail's history that it has painted its iconic post boxes a different colour permanently to mark an historic achievement.