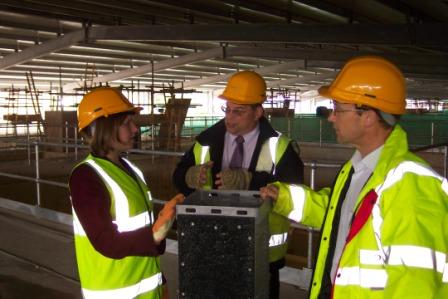 Katrine Water Project, the new water treatment works under construction near Milngavie, covers a huge area adjacent to the Milngavie reservoirs, but once complete there will be little evidence of the scale of the operation taking place.

Having a minimal impact on the surrounding environment has been one of the key aims of project managers since work began on the scheme two years ago, and Jo Swinson MP saw how that aim is being put into practice during a visit to the plant on Friday.

After taking a tour of the facility, Jo commented:

“The ongoing work at the Katrine Water Project really is remarkable. It is clearly very important to retain the reservoir as a popular recreational facility, and the team are doing a great job of making sure the large structures being built will not impact negatively on the existing landscape.

“When the project is completed late next year, much of the main plant building will be underground, with only one storey visible from outside. Scottish Water have been active in seeking and considering the views of the local community throughout the project’s development.”

“The Katrine Water Project is the flagship scheme in Scottish Water’s ongoing £2.1bn investment programme, and once completed will supply drinking water to some 700,000 people.

“Loch Katrine has been supplying piped drinking water since the mid-19th century, and this project continues the legacy of pioneering engineering work to bring the highest water standards to people in East Dunbartonshire, Glasgow and elsewhere.”

Work began on the Katrine Water Project in March 2004, and is set to be completed in December 2007. The latest cost estimate for the project is £120 million, part of Scottish Water’s £2.1bn investment programme for 2007-2010