Lessons of the Holocaust must never be forgotten 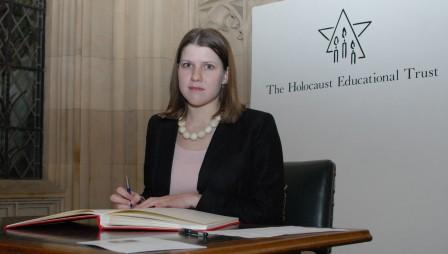 Friday, January 27th 2006 will mark Holocaust Memorial Day. Jo Swinson MP will join with people across the country in remembering all those who suffered at the hands of the Nazis during the Holocaust.

The theme of this year’s memorial is ‘One Person Can Make a Difference’. It aims to celebrate the courage of rescuers and those who helped the persecuted survive by giving hope and friendship in a time of despair.

The theme also offers each person in the country the opportunity to challenge their own current behaviour, forcing them to ask themselves the question – ‘What would I have done if I had been there?’

Reflecting on the terrible events of the Holocaust, Jo said:

“The lessons of the holocaust must never be forgotten, both for the sake of those that perished and those that survived.

“Recently, we have witnessed attempts to deny or denigrate the significance of the Holocaust. As survivors become fewer and events pass out of living memory, the need to remind ourselves becomes greater than ever.

“To avoid repeating the tyrannies of the past, we must learn the lessons of history – the Holocaust must continue to disquiet the collective consciousness of the Western world.”

This will be the sixth time that the annual event has taken place. A national event will be staged in Cardiff, with associated events across the rest of the UK. Many of the UK celebrations are taking place on January 26th, rather than on a Friday, which has implications for a number of faiths.

Holocaust Memorial Day came about following an MP’s visit to Auschwitz-Birkenau with the Holocaust Educational Trust. Moved by his visit, Andrew Dismore MP proposed a bill, “to introduce a day to learn and remember the Holocaust” June 30 1999.