Lowering the voting age will reconnect young people with politics 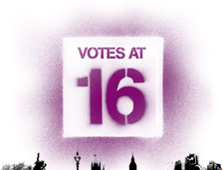 UK politics would benefit from sixteen-year-olds being given the right to vote and to stand as candidates, according to Jo Swinson.

Jo raised the matter of lowering the voting and candidature age in Parliament today. Speaking in the House of Commons, she said:

“I welcome the recent reduction in the age of candidature to 18, indeed I hope to be able to pass on the title of youngest MP sooner rather than later as a result, but does the Hon. Member not agree that we should be looking to build on that move and reduce the age for voting and candidature to 16, so that young people can participate in elections as citizens in the fullest possible way?”

Commenting after the debate, Jo said:

“The move in July this year to allow candidates to stand for Parliament from the age of 18 was a step in the right direction, but not enough to reverse the current trend of young people switching off from politics.

“Allowing young people both to vote and stand as candidates aged 16 would give them a stake in the political process at a younger age. The whole political system in this country would benefit hugely from a generation of young people growing up having established a ‘voting habit’ when young.

“The 16-year-olds I have met in schools around East Dunbartonshire are certainly responsible and capable enough to be trusted with the right to vote.”