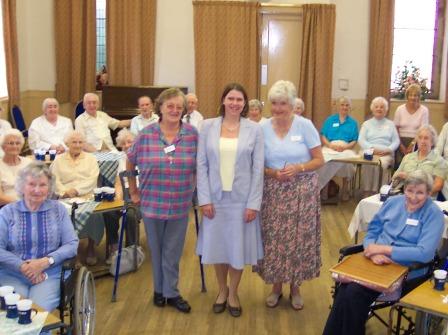 Jo Swinson MP has launched a campaign for local pensioners with a speech to members of the Monday Club in Bearsden.

The Monday Club has around 20 members who meet weekly to socialise and listen to guest speakers. In her speech to the group, Jo highlighted a range of issues affecting East Dunbartonshire pensioners, including problems with the uptake of Pension Credit.

“Over the coming Parliamentary recess I will be campaigning across East Dunbartonshire to inform people on a series of issues surrounding pensions. Today’s event provided a great starting point for this campaign, as it put me face-to-face with a group of older people whose concerns over pensions I could listen to and discuss.

“The pensions system in this country must undergo major reforms to take account of changes in society. The Government has announced some changes following the publication of the Turner Report last year, but they continue to block key points such as a reduction in the widespread use of means-testing.

“Many older people miss out on getting their full entitlement of Pension Credit, due to problems with the pensions system. My campaign will aim to highlight this and other issues such as women’s pensions and the scandal of poverty that affects far too many of our older people.”