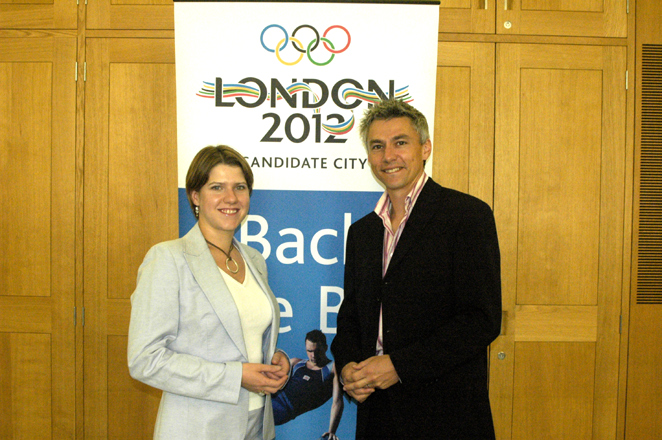 Just days before Olympic gold triple jumper Jonathan Edwards flies to Singapore as part of the London 2012 delegation hoping to bring the Olympic Games back to Britain for the first time in 64 years, Jo Swinson MP has added her support to the 2012 campaign.

Jo Swinson MP said “If the IOC awards London the Games on 6 July, it will be a fantastic day for the whole of the UK. Hosting the Olympics is a great honour and will bring real benefits up and down the country. Hampden has been identified as one of the venues for the football competition, should London win the bid.

“Over 1 million pieces of sports equipment used during a London Olympics would be passed onto sports clubs and charities after the Games end – as will five temporary swimming pools and four arenas. There will be the chance to host athlete preparation camps months ahead of the actual event. Tourism will get a boost and UK companies will be able to compete for a whole range of contracts.

“But probably most important of all, it will provide a unique inspiration for children to get much more involved in sport and physical activity.”

Jonathan Edwards said “I’ve been fortunate to have competed in four Olympic Games and it is an amazing experience. I won my Gold at the Sydney 2000 Games but for any athlete, the chance to reach the very top and win on home soil is the ultimate dream.

“London has a great bid and has a very real chance of wining on 6 July. If we do, it will be the greatest day for sport our country has ever seen.”