Oxfam Bishopbriggs welcomes Jo for the start of Fairtrade Fortnight 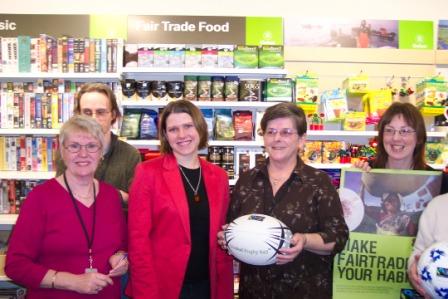 Jo has launched Fairtrade Fortnight at the Oxfam shop in Bishopbriggs

Jo Swinson MP has visited her local Oxfam shop in Bishopbriggs to mark the first day of Fairtrade Fortnight.

Several events are planned for around East Dunbartonshire to mark Fairtrade Fortnight, which runs from 6th-19th March. Jo has been a strong supporter of Fairtrade and marked the launch by meeting staff and customers in the Bishopbriggs store, as well as sampling some of the Fairtrade products on sale.

“People in East Dunbartonshire have been very supportive of the Fairtrade movement and want to see Fairtrade products on sale throughout the area. Organisations like Oxfam have been at the forefront in promoting Fairtrade and it is great to see it being put in to practice here at the Bishopbriggs shop.

“The next two weeks will see Fairtrade being promoted not only here in East Dunbartonshire but throughout Scotland. If you buy goods that carry the FAIRTRADE mark, then you can be sure that the workers who made them have been treated fairly and have received a fair wage. I would encourage people in East Dunbartonshire not only to buy Fairtrade products during Fairtrade Fortnight but to make fairtrade your habit.”

“We are now stocking more & more Fairtrade products which are proving very popular with our customers. People in the area are keen to support Fairtrade and I hope that they will be interested in the range of new products that are now arriving in the shop such as Fairtrade footballs, rugby balls and volley balls as well as other favourites like Fairtrade chocolate and Easter Eggs.”

Oxfam has been involved in the Fairtrade movement for more than 40 years. In 1992 it helped to set up the Fairtrade Foundation that controls the FAIRTRADE mark guaranteeing that the goods on sale have been fairly traded. The FAIRTRADE mark guarantees that the producer will have been given a fair and stable price for their produce and will receive extra income from the sale of their produce. It also guarantees that the environment has been respected.