On Friday Jo judged a filmed debate by pupils on the motion “The media’s portrayal of perfection is responsible for the increase in eating disorders” and then got a behind-the-scenes tour of the clothes being created by the high school’s budding designers for an upcoming fashion show and awards ceremony.

Pupils at the school are making a documentary film about the media’s portrayal of body image comprised of debate footage and interviews with pupils on a range of surrounding issues such as magazines and pop songs. Jo was asked to participate to discuss the Campaign for Body Confidence which she co-founded.

“I was very impressed by the debate at St. Ninian’s. The chair and speakers were articulate, their arguments were well researched and it was a thoroughly enjoyable occasion. I also had the chance to watch the S2 pupils in art class turning the early stages of their designs into reality. I’m looking forward to seeing the final results and presenting prizes to the winners at the fashion show on 23 March.”

“It was great to tap into Jo’s expertise for the collaboration between the English and Art departments for this year’s body image project. We’ve joined forces to tackle the issue of Health and Wellbeing in Curriculum for Excellence identifying negative body image and teen anorexia as major problems facing Scotland’s Youth. It’s going to be a lot of hard work, but It’s been so rewarding to see how thoroughly engaged the pupils are with the body image project.” 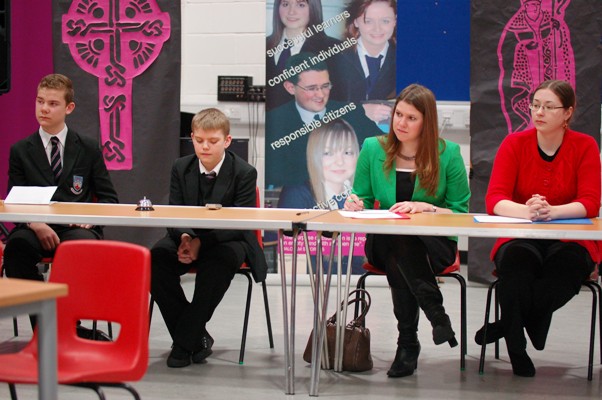 Pupils Aeden Baker and John McChesney who took on the roles of Chair and timekeeper in the debate; Jo Swinson MP and teacher Amy Marks at St. Ninian’s High School who was also on the judging panel along with Librarian Helen Martin (not in photo).