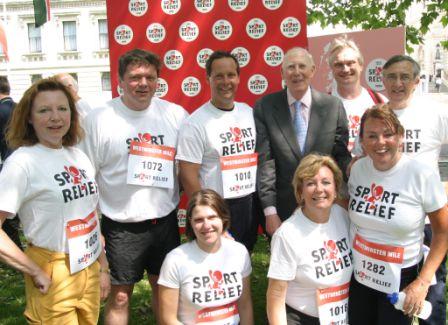 East Dunbartonshire’s MP Jo Swinson was among a whole team of MPs and members of the House of Lords who came together this week (Wednesday 7 June) to complete the Westminster Mile and raise money for Sport Relief.

More than 70 Houses of Parliament members swapped their suits for shorts, trainers and their first Sport Relief red sock before going the distance around St James’s Park.

The MPs and Peers were in great company; starters orders came from legendary four-minute miler Sir Roger Bannister and Secretary of State for Culture, Media and Sport, Tessa Jowell. First past the post was Labour MP Jim Murphy with a winning time of 5mins 22seconds, four seconds faster than his 2004 Westminster Mile record. Hot on his heals were Willie Rennie MP and Tom Brake MP. Local MP Jo Swinson was the first woman across the line in 7mins 37seconds, just beating the Minister for Sport Richard Caborn.

Everyone put their best feet forward to help vulnerable people here in the UK and some of the world’s poorest countries, supported by Sport Relief. They are now calling on the rest of the nation to Go The Extra Mile and sign-up for the Sainsbury’s Sport Relief Mile on 15 July; people from East Dunbartonshire can go the distance at Glasgow Green.

After the race Jo said, “In contrast with the usual confrontational style of the House of Commons chamber, it was refreshing to see MPs of all parties coming together to raise money and the profile of a great cause like Sport Relief. The run itself was great fun and I hope many constituents enjoy taking part in Glasgow on 15 July.”

Richard Caborn, Minister for Sport, said: “This has been a fantastic event. It is great to see so many of my Parliamentary colleagues getting their trainers on and stretching their legs for Sport Relief. Whether running or walking, I hope everyone has just enjoyed taking part and raising money for such a good cause.”

To see the slightly rosy-faced MPs and Peers together with tens of thousands of Sainsbury’s Sport Relief Milers in action you can tune into Sport Relief on BBC ONE, 15 July. Highlights will be part of The Sport Relief Mile show (10:30am – 12:00pm) presented by John Inverdale and The Night (19:00 – 00:30), presented by Chris Evans, Davina McCall, and Gary Lineker.