Local MP Jo Swinson and the leader of the Scottish Liberal Democrats Willie Rennie MSP gave their backing to the Kirkintilloch Campus of Cumbernauld College on a visit last week.

They discussed the effect of the Scottish Government’s £34.6 million cut to the college budget. Ahead of the final budget debate in Holyrood this week, Mr Rennie has stressed the importance of maintaining college funding at a time when so many young people across Scotland remain out of work.

“Kirkintilloch Campus provides first class local learning for all ages to give them the skills for life and work.  I was impressed by what I heard and saw at the facility.  In times of economic difficulty it’s important we have local colleges that people are able to access easily.”

“Kirkintilloch Campus serves a crucial link in the local community, enabling more young people to gain the skills they need to get on in life. Scottish Liberal Democrats share the concerns of students and college staff in Cumbernauld and across Scotland that any further cuts to college budgets could have damaging consequences.

“The Education Secretary must listen closely to college staff and students ahead of its merger with Motherwell College. Particularly issues around increased travel and the financial burden attached to that.

“We will continue to urge the SNP government to reverse these cuts during the final debate of the budget this week. I want to build a stronger economy in a fairer society, which gives people opportunity during tough economic times.

“We need more resources to equip people with the skills for work.  I was impressed by the work at the Kirkintilloch Campus.  It’s got a good future.”

“I would urge everyone to write to their MSP and make their voice heard by supporting NUS Scotland’s Fund Scotland’s future campaign.” 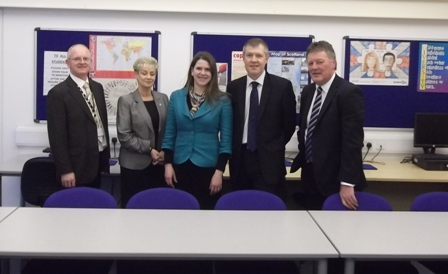