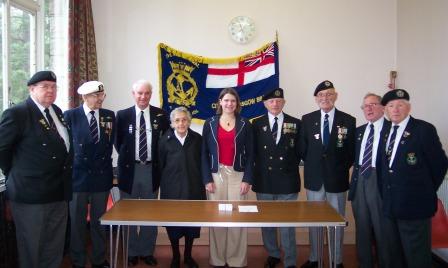 Jo Swinson MP rewarded the service of Veterans from the City of Glasgow Royal Naval Association, by presenting them with Ministry of Defence Veterans Badges at a ceremony in Bishopbriggs yesterday.

“It was a great pleasure to be able to present the members of the Royal Naval Association with Veterans Badges. They will be able to display these badges proudly alongside their other decorations in recognition of the dedicated service the have carried out.

“Listening to the Veterans recount some of their experiences of service in the armed forces was fascinating and gave an important sense of perspective, especially given the servicemen and women who are deployed in conflicts around the world today.”

“It is good to know that some of our elected representatives, in this case Jo Swinson, still appreciate the role of our armed forces, be it in present day, or as in our case veterans, and the roles that they have and still carry out on behalf of the nation.”