Carers Week recognises the contribution made by those people in East Dunbartonshire and throughout the UK who provide unpaid care for someone who is ill, frail or disabled. The work they carry out is vital for their families and friends, and for their communities.

The theme for Carers Week 2012 is ‘In sickness and in health’ recognising the strain families are under and calling for better financial and practical support for the diverse range of people who have caring responsibilities.

Jo and Fiona have joined together to pay tribute to carers, and to urge that they receive more support in their caring roles.

“There are so many local residents who sacrifice not only their time, but also their money and their health in order to care for a loved one. Together they save this country an incredible £119 billion every year. It’s vital that carers are offered regular breaks from caring and health checks so that they can be supported.

“I am taking part in Carers Week to show my respect and appreciation for our carers. I also want to let them know that there are services out there to help them. Caring can be so incredibly demanding. It’s important that carers know that they don’t have to struggle on alone.”

Fiona Phillips has personal experience of being a carer. She says:

“From personal experience, I know caring can demand a lot of your time and attention, which in some cases can put pressure on other areas in your life such as financial responsibilities and relationships. These problems can prove to be exhausting and mentally grueling and can really take its toll on your health and wellbeing. I hope that Carers Week can again help to achieve change, and make a real difference to the lives of carers in this country.”

“I’m delighted that MPs are listening to carers’ concerns and supporting this year’s Carers Week. We must take action to support the UK’s 6.4 million carers. Many are paying the price of a care system in crisis – being forced to give up work to care and often pushed into ill-health, financial hardship and debt because of a lack of support to help them care.” 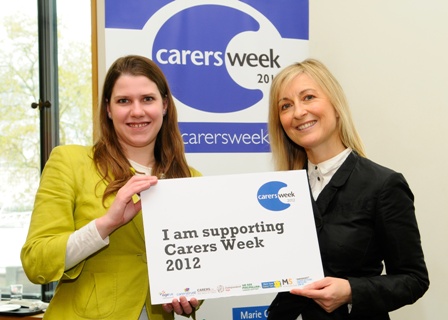